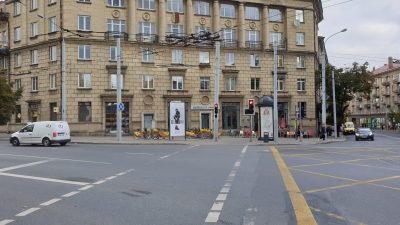 1996 m. Pillars were installed in Vilnius and Kaunas. The company “Wennergen Williams AB” is acquired by the “More Group”.

1997 m. The amount of poster pillars in Vilnius and Kaunas were increased.

1998 m. The amount of poster pillars in Vilnius were increased; the efficiency research (“Post campaign”) of the campaigns was started; a database of 1200 performed research studies was created.

2000 m. Pillars were installed in Klaipėda.

2006 m. The internal structure of the company “Clear Channel Lietuva” was changed.

2012 m. The number of poster pillars in Panevėžys were increased.

FREEDOM
We believe that entrepreneurial behaviour leads to strong local brands. Within Clear Channel, that means expressing your local culture, identity and ideas responsibly, without the restrictions and red tape of a heavily centralised business. Our group structure liberates local teams to shine at what they do best.

FLEXIBILITY
Every client’s needs and interests are valued. Advertisers and development partners want out-of-home solutions tailored to their specific needs and the audiences they want to reach, with insightful, engaging creativity. On that score, we’re ahead of the curve. Our challenge is to keep it that way.

FORWARD THINKING
Word spreads fast in our business. The appetite for news about what’s next, and its value to clients, is constant. We don’t just talk about what’s next; we want to be what’s next. By investing heavily in research, insight and audience measurement, developing our digital out-of-home estate and automated buying capabilities, we are giving fresh relevance to the out-of-home medium. Our gaze is firmly fixed on the future.

FULFILLING PROMISES
Fulfilling Promises is a personal commitment for each and every one of us, to build our business by building relationships and partnerships, both internally and externally, and thinking carefully about the promises we make and our ability to deliver.

FAST
Being Fast reflects our ambition to be first in innovation and creativity – and that requires us to work quickly. We build collaborative and trusted relationships with our customers, our business partners and stakeholders, enabling us to be agile and make quick decisions. This means we are able to respond to the rapidly changing needs of our customers – and our customers’ customers.

FAIRNESS
Fairness means we respect and embrace the uniqueness of all our employees. We work together to create an inclusive environment where everyone can bring their true selves to work. As a business, we strive to reflect and support the ever-changing face of the audiences we reach every day, bringing brands face to face with people. Our teams need to be as diverse in their composition and outlook as the audiences we reach every day. We are proud of behaving ethically as a company, as an employer and a business partner.